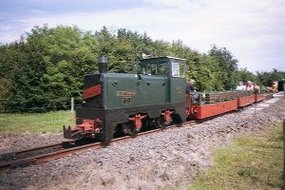 In 1991, The Woodhorn Museum (Wansbeck Council) was given an ex mining locomotive and three man-riding carts by the NCB, following the closure of Vane Tempest Colliery in County Durham.
It was decided rather than allow these vehicles to become a static exhibition, it would serve the heritage of the community better if they were made operational and allowed to develop their potential as a visitor attraction. Because of this, a volunteer group was formed to manage and build a railway on which the vehicles could operate.


The line was built, being completed in 1994 and ran from the site of the present Museum, along the side of the QE2 lake, terminating at the platform known as Lakeside Halt. The railway was run ever since that time, with the exception of the years when the county Archives was built. Following the redevelopment of Woodhorn Museum reopening in 2006, we regained access to our shed, locomotive (Black Diamond) and rolling stock. We then spent two years refurbishing the line back up to running standards and reopened in 2008.

In 2008, we also purchased a second locomotive (Edward Stanton), to take off the load put onto Black Diamond, who was developing faults every few weeks. Following a successful few years, we gathered enough money to create an accessible carriage (Ellie-Kate), which is able to carry 4 wheelchair bound passengers, allowing them to experience the trip too. To store this carriage, we gained funding from Banks Group to create a second storage shed. We also managed to gain a group of engineers from Network Rail to come to us to fit and create the second storage road where we keep this coach and one Locomotive.

In 2013, we gained a two Grants to purchase a third Locomotive, the money coming from the Rio-Tinto Alcan fund and Coalfield Regeneration Trust, hence the name Rio-Gen. We thank them both for the support they gave us during this time. She was not passenger ready when she arrived and went though two years of modifications and additions to allow us to use her on services. She is also used for our Driver for a Fiver scheme.

Between 2013 and 2015, we expanded our ticket office into a full signal box and created a unique signalling system for a layout of our type. We have one Platform Starter, a Home signal and two Shunt Signals, protecting the Loop and Second storage road. They all work to the standard of a full railway and have a full interlock system with the crossing. So if you see the crossing lights going there is a train approaching so please stand back!

In 2017, Ellie-Kate unfortunately had to be taken out of service. We therefore converted the two remaining flat wagons into Accessible Wagons and split the name Ellie and Kate over each.

All services subject to availability, weather conditions and staff numbers . Up to date information can be found on Social Media. For full Terms and Conditions click here.